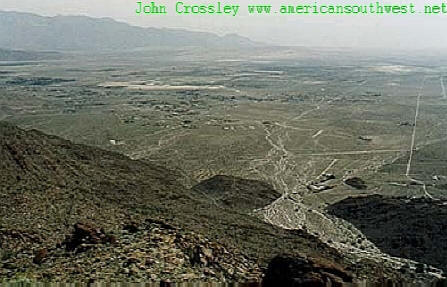 There is much to like about the Borrego valley of California: A beautiful natural landscape stretching out in all directions; countless venues to explore and experience, i.e., All The Wild And Lonely Places of which Lawrence Hogue writes so eloquently in his book of the same title about the Anza-Borrego Desert; rare and precious solitude, peace and quiet; fantastic weather; clean air; dark night skies filled with brilliant stars; spectacular sunrises and sunsets; abundant wildlife; magnificent wildflower displays; and much more. All of these things are part of the natural environment granted to those who live in and visit this remote, enchanted valley. They are the simple, subtle, and subdued pleasures of the Anza-Borrego desert.

On the other hand, there is much that must change to preserve the above:

A population characterized by a kind of overweening, hedonistic, self-interest; residents who, for the most part, take for granted all those things that make Borrego special and desirable and are unwilling to exert or inconvenience themselves in any way, however slight, to protect them; the resulting lack of a meaningful and widely shared environmental ethic; ineffective local agencies and organizations that institutionalize the values of the community and thus compound these problems; uncontrolled development resulting in a built environment that is spiraling out of control and becoming a blight on the exquisite landscape; and, most despicable of all, a totally cavilier attitude toward, profligate use and irresponsible waste of our most precious and increasingly scarce resource - water.

As should be evident to even the most casual observer, the positives are all represented by the fragile natural environment of the Anza-Borrego Desert; the negatives, on the other hand, derive from a social/cultural milieu that is inimical to that environment. The problem of water in the Borrego valley, more than anything else, epitomizes the destructive tensions between the positive and the negative aspects of Borrego and the desperate need to Honor The Desert by living in harmony with and exercising responsible stewardship over our unique, fragile, and irreplaceable environment.

What distinguished the indigenous people of the Anza-Borrego Desert from modern inhabitants, among other things, is that they lived in true communities of dozens or hundreds of people. Their economy and very survival were based and dependent on concerted, cooperative efforts involving entire communities.

Achieving that desirable equilibrium state now will likewise require the modern population of the valley to come together and become actively involved in land use and zoning, community design and planning, resource economics, environmental issues, and other, related matters. Large numbers of residents will have to inform themselves about these issues, attend and speak out at meetings and public hearings, write letters and make phone calls, and engage in other tedious and thankless work.

Almost no one in Borrego seems willing to do so. As Hogue says: "It's more fun to go sit on a rock in the wilderness." (Hogue, p. 226) Apparently most Borregans agree with him and have opted out.

What is required to stop the wanton distruction of the Borrego Valley Aquifer is simple.

Individual members of the community can do a lot by just showing up at even one public meeting a year and standing to voice an opinion about the value of maintaining the aquifer and the importance of the public trust placed in officials empowered to do so. It is not necessary to get into the gritty details of every proposal or policy under consideration; the plain act of showing up and speaking up for what is important goes a long way. Your mere presence at a meeting signifies your concern and testifies to the importance of these issues. As Woody Allen says: "Ninety percent of life is just showing up." In other words, you don't have to do a lot or make a huge time commitment to make a difference; but it does require that you get off your rock and stand up. (see also: Denial Ain't Just a River...

Top of Page Home "In Case You Missed It..."  "Notes from Underground"  FAQs  Links  Hey Digger!